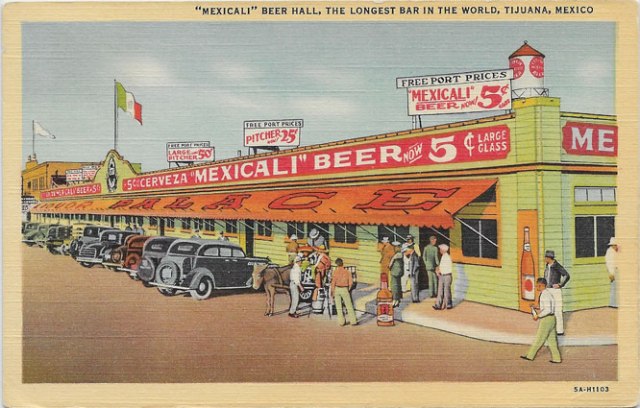 Exterior of “Mexicali” Beer Hall, The Longest Bar in the World, Tijuana, Mexico

These two postcards show the Mexicali Beer Hall which was located in Tijuana, Mexico. These postcards were published in 1935, after the end of prohibition in the United States. However at least one of the images is from an earlier date and is shown at the website of UC  San Diego Library . That image is numbered 123375 which indicates a date of 1928.

Wikipedia has an article in German about the Mexicali Beer Hall. An English translation by Google is as follows:

Mexicali Beer Hall was a large beer bar in the Mexican city of Tijuana . With a length of about 50 to 60 meters, she took a complete block on the Avenida Revolución . Known as La Ballena (The Whale ) in Mexico , the restaurant is described on old postcards as the largest bar in the world at that time. The beer brand Mexicali, which at that time was the only Baja California brewed beer brand and from which the bar took its name, was given away.

The Mexicali Beer Hall was probably created as a result of prohibition in the United States, or at least benefited from this. It was on the Avenida Revolución, where in the 1920s and 1930s, at the time of Prohibition, which lasted from 1919 to 1933, a number of pubs had been set up to offer beer and liquor at reasonable prices, and thus a multitude lured by tourists from the US .

Possibly due to the end of Prohibition also went down the sales of the beer houses and some of them closed. The Mexicali Beer Hall was eventually closed and replaced by a Woolworth branch, which already no longer exists. 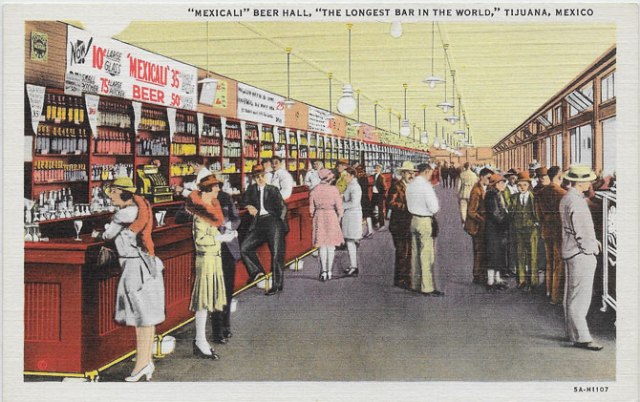 Interior of “Mexicali” Beer Hall, The Longest Bar in the World, Tijuana, Mexico

I am a longtime postcard collector who has been creating websites and blogs based on my postcard collection since 1998.
View all posts by postcardy →
This entry was posted in Brief Posts and tagged linen, Sepia Saturday. Bookmark the permalink.