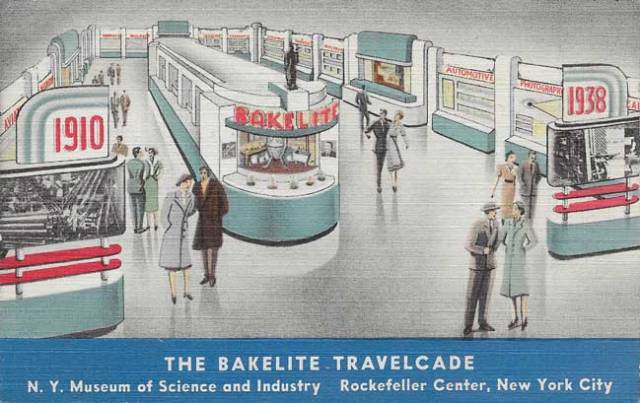 Bakelite was one of the first plastics made from synthetic components. It was developed in 1907 by the chemist Leo Baekeland. Bakelite was advertised as a material of more than a thousand uses. It was used for its electrical nonconductivity and heat-resistant properties in electrical insulators, radio and telephone casings. Other uses included kitchenware, jewelry, pipe stems, children’s toys, and firearms. Many of the products had a streamlined futuristic design.

The Bakelite Travelcade was a touring exhibition featuring “Modern Plastics for Modern Living.” The exhibit was shown at the Franklin Institute in Philadelphia, the New York Museum of Science and Industry, the Buhl Planetarium in Pittsburgh, and the Chicago Museum of Science and Industry. It also served as the company’s exhibit at the New York World’s Fair.

This postcard is from the New York Museum of Science and Industry where the Bakelite Travelcade was exhibited during March, 1938. A series of panels framed by streamlined pylons told the Bakelite story. Colorful, animated exhibits emphasized the part that plastics played in industry, the home, and in daily life. Visitors could watch a hydraulic molding press turning spoonfuls of powder into souvenir spoons and view a film about Bakelites’s processing and applications.

I am a longtime postcard collector who has been creating websites and blogs based on my postcard collection since 1998.
View all posts by postcardy →
This entry was posted in Spotlights and tagged advertising, exposition, linen. Bookmark the permalink.