Vermont is the leading maple syrup-producing state in the country, producing about 41 percent of the United States’ maple syrup.  The maple sugaring process has been illustrated on many postcards, most of which are from Vermont. These postcards are mainly form the 1950s and 1960s.

Methods similar to those shown on the postcards were used for a century following the Civil War,  and some syrup is still produced using methods like these. However, there are newer less labor-intensive methods also with high tech processing equipment and  tubing systems  that take the sap directly from the tree to the sugarhouse.

GATHERING THE SAP FOR THE FAMOUS VERMONT MAPLE SYRUP. Maple sugar making is one of the oldest agricultural enterprises in New England. For many years the production of maple sugar was an important part of the self-sustaining program found on every farm. The family’s yearly needs for sugar were thus supplied. Today, while maple syrup continues to be sold in many types, the principal sales are in syrup and candy form. 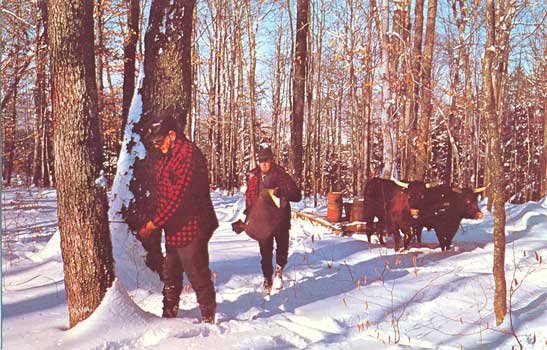 SUGARING IN VERMONT. In the early spring holes must be drilled into the maple trees and spouts inserted from which the sap bucket is hung. Then the wait begins for the warm days and freezing nights which cause the sap to run.

GATHERING OF MAPLE SAP BEGINS WHILE SNOW IS ON THE GROUND

When winter finally releases its icy grip on the countryside, the first sign of spring is the gathering of maple sap. Shown here are trees being tapped and the sap being loaded for transport to the sugar house.

MAPLE SUGAR TIME. In the early spring the sap begins to flow. Ideal weather for good “runs” of sap is when there is thawing in the daytime and freezing during the night. 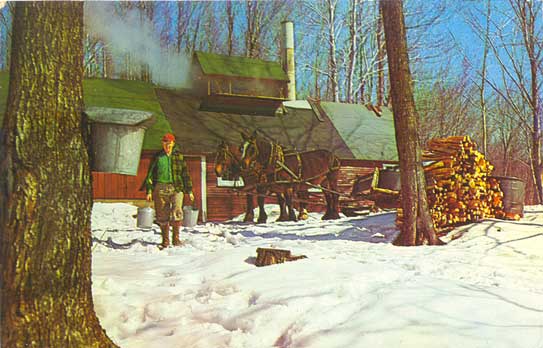 SAP BEING POURED INTO GATHERING TANK. Note the clear, watery consistency of the sap. It tastes sweet, testing from 1½ to 4 per cent sugar. This sugarbush has been cleared of scrub brush and small trees, and a tractor works fine here.

NEAR THE END OF THE RUN–VERMONT SUGAR ORCHARD IN LATE SPRING. Making Maple Syrup and Sugar during February and March of each year has become a tradition in Vermont. Here the trees have been tapped and the buckets hung. Now the sap is being collected and when boiled will produce pure Vermont Maple syrup and Sugar. Vermont has thousands of Sugar Orchards similar to this one in East Central Vermont.

Water boils off as steam and maple sap becomes thicker. After testing with thermometer or by hydrometer, it is drawn off as syrup, being continually replaced with fresh sap. This final boil is often done in separate finishing pans to better control the exact density. 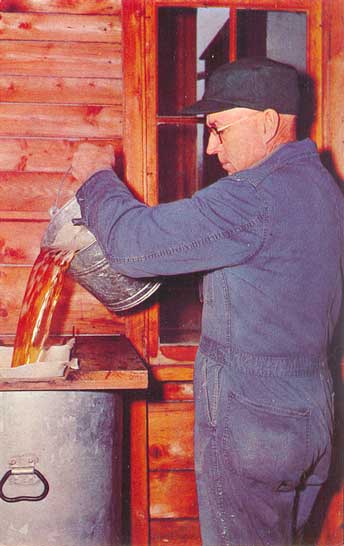 Processed maple syrup is finally filtered through felt, special paper, or canton flannel. This strains out the niter, which is a crystalline salt or sugar sand, always contained in syrup. There are three grades of syrup.

To keep maple syrup fresh it is packaged in airtight sterilized containers. Fancy, or grade AA syrup is light amber in color with finest maple flavor. Grade A is medium amber with stronger flavor. Grade B is dark amber, possible cloudy, with strong flavor.

I am a longtime postcard collector who has been creating websites and blogs based on my postcard collection since 1998.
View all posts by postcardy →
This entry was posted in Feature Articles and tagged agriculture. Bookmark the permalink.